Legend-State is the result of dozens of experiments and rewrites to build the fastest possible state system. The primary reason it's so fast is that it optimizes for the fewest number of renders - components are only re-rendered when the state they truly care about is changed.

It may seem silly to quibble over milliseconds, but state is a hot path of most applications, so it's important that it be as fast as possible to keep your whole application snappy.

We'll show results of the popular krausest benchmark and use that to describe why Legend-State is so fast. 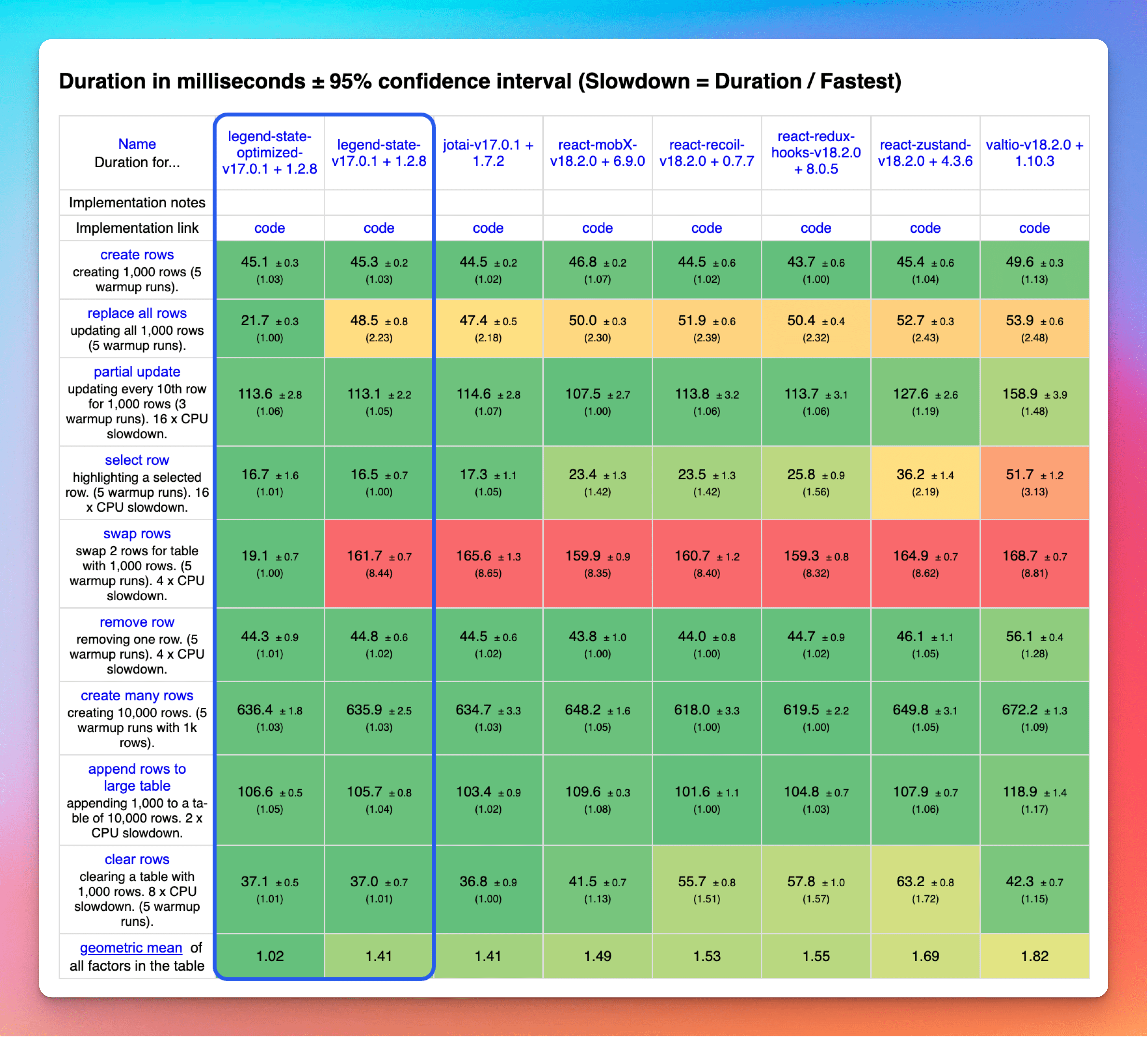 Legend-State (on the left) optimizes for rendering each row when it changes, but not the entire list, which is reflected in the fast "partial update" and "select row" benchmarks. That typically incurs an extra upfront cost to set up the listeners in each row, but Legend-State is so optimized that even so it's actually still the fastest in the "create many rows" benchmark.

Legend-State really shines in the "replace all rows" and "swap rows" benchmarks. When no elements are added or removed, it does not need to re-render the list and renders the individual rows that changed. That brings a beed speed improvement for drag/drop or when items are moved around in a list. 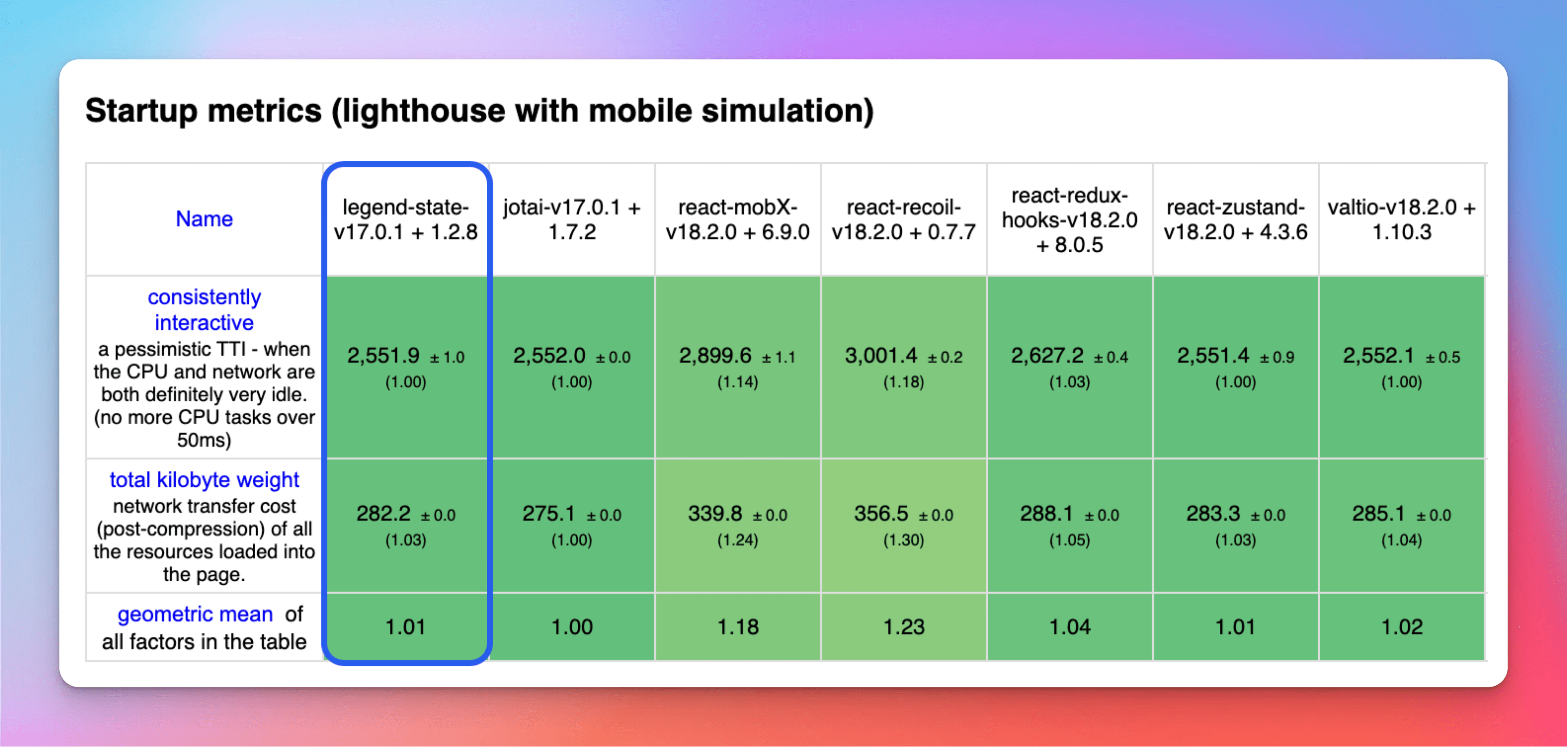 In these benchmarks you can see that Legend-State has the fastest TTI (time to interactive) and lowest CPU cost, because Legend-State doesn't do much processing up front. Creating observables and adding thousands of listeners does very little work. Because observables don't have to modify the underlying data at all, creating an observable just creates a tiny amount of metadata. 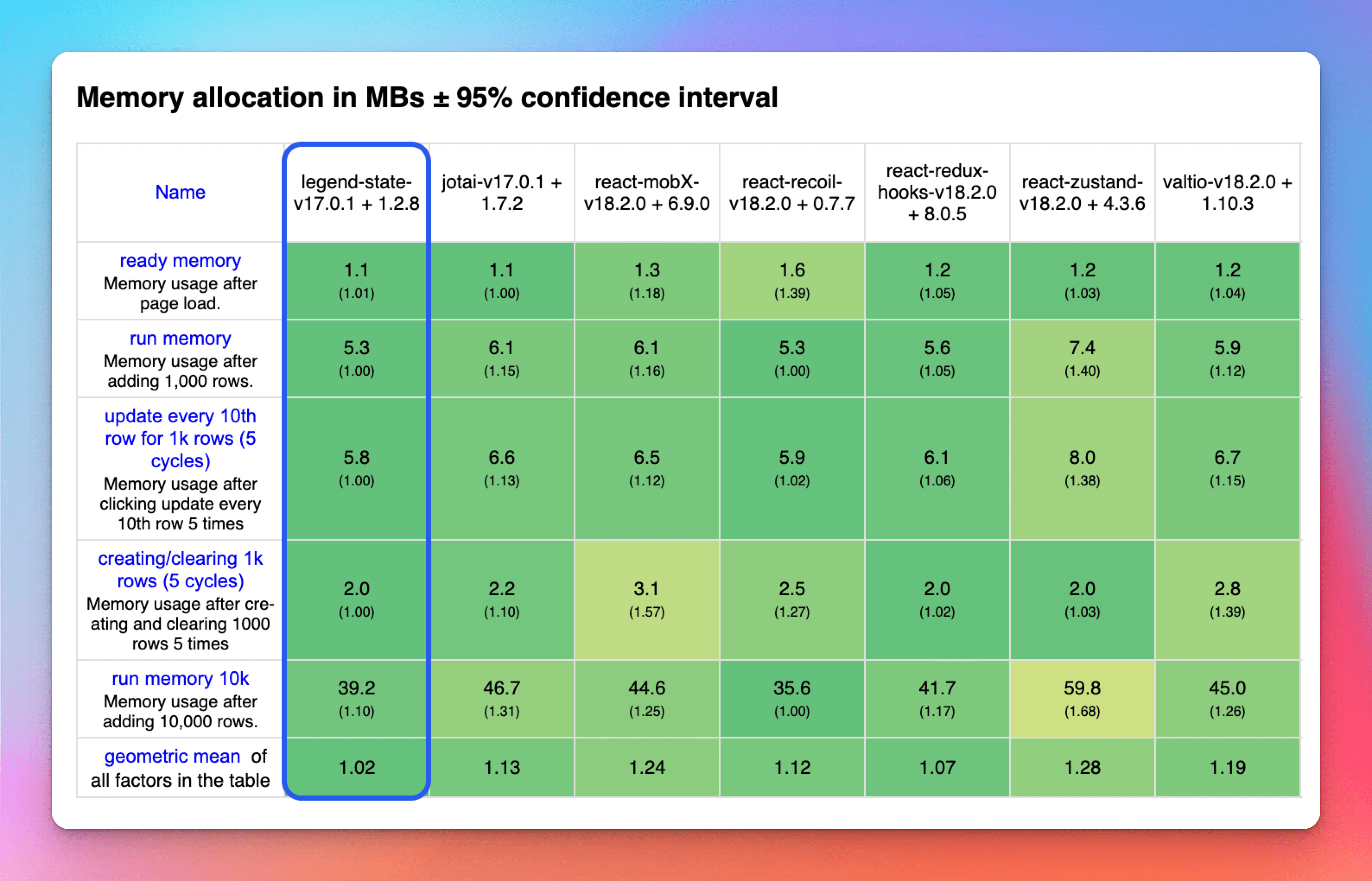 The memory usage is lower than the others because Legend-State does not modify the underlying data or keep a lot of extra metadata, and it does not create many objects or closures.

Legend-State is optimized in a lot of different ways:

Legend-State uses Proxy, which is how it exposes the observable functions (get/set/listen etc...) on anything within state. But it differs from other Proxy-based systems by not touching the underlying data all. Each proxy node represents a path within the object tree, and to get the value of any node it traverses the raw data to that path and returns the value. So every node within the state object stores minimal metadata, and never has to modify or clone the underlying data, which keeps object creation to a minimum and memory usage down.

Listeners at each node

Each node keeps a Set of listeners so that you can listen to changes to any value anywhere within the state. This is great for performance because changes only call the few listeners that are affected by that change. JavaScript's Set provides nice benefits here as its uniquenesss constraint ensures callbacks are added only once, and removing listeners is an instant O(1) operation.

Extensive care is taken to ensure that components are rendered only when their state truly changes. Legend-State provides functions to be extra specific about when it tracks changes and useSelector to isolate a tracking computation to return one value. The best thing for your app's performance is to render less, less often.

Legend-State has built-in helpers to easily extract children so that their changes do not affect the parent. This keeps large parent components from rendering often just because their children change.

Shallow listeners are called on objects only when keys are added or removed, but not when children are changed. This lets the child components manage their own rendering and large parent components don't need to render.

Optimizing list rendering is a primary goal because Legend-State is built for Legend and its huge documents and lists, so it aims to render parent list components as little as possible. When changes to an array only modify children or transpose elements, and do not add or remove elements, it can render only the changed elements and skip rendering the parent list. See Arrays for more details.

While other state libraries create lots of new closures and objects for each observable, Legend-State is careful to keep it to a minimum. The observable functions are created only once so there is little cost to creating tons of observables.

Because Legend-State's api is very terse and require no boilerplate code, your apps don't need to be filled with tons of extra boilerplate code. So your apps are smaller and faster because you're shipping smaller files to your users.

Beyond the architecture optimization, Legend-State also does a lot of micro-optimizations which don't necessarily have a huge effect on their own, but it all adds up.